Head out to the far edges of Uzbekistan with a tour to the Aral Sea. Travel along the cliffs of the Ustyurt Plateau, through the ship graveyards where the shoreline used to be, and out across the former sea floor to the remnants of the very salty sea. Learn about the past and the present of this region, with excursions to ecological and cultural sites. This two-day Aral Sea tour takes you from the broad desert and last waters of the Aral Sea to the Mizdakhan Necropolis and the Gyaur-Kala Fortress, telling the modern history of this region of Uzbekistan.

Must visit on your Aral Sea Tour

The Aral Sea is a once-large saltwater lake in Central Asia occupying the northwest end of Uzbekistan and a part of southeast Kazakhstan.

Numerous vessels used to plough the sea one day. Most of them were fishing boats; however, some were military ships belonging to the Amudarya flotilla. Several large ports and fish factories were situated near the sea. The settlements on the shore were buried deep in trees, and flocks of aquatic birds used to fly above the generous waters of this great Central Asian lake. Until the 1970s the Aral Sea was a home for 34 species of fish, 20 of which were of commercial importance. In 1946 the lake gave 23 thousand tonnes of fish, while in the 1980s the annual figure reached 60 thousand tonnes.

The 1930s were characterised by intensive construction, mainly in Uzbekistan and Kazakhstan, of a broad network of irrigation canals. The waters of the two great Central Asian rivers raised the regional agriculture to an incredibly high level. The irrigation system made it possible to create enormous cotton fields. By the total area of cotton plantations the USSR was the second in the world (Uzbekistan alone gave up to 6 million tonnes of cotton annually in the best years). The area near the Aral Sea even became suitable for growing rice. But no one ever thought about the possible consequences. As a result, the subtle balance in the ecosystem of the sea basin was disturbed. In the 1960s it became apparent that something had gone wrong. The water level was dropping very fast. In 1989 the Aral Sea was divided into two parts by a strip of land. By 2003 the surface area shrank to ¼ of the initial size, while the original volume was reduced by 90 %! The Soviet Union disintegrated and the grandiose plan to direct some portion of Siberian rivers and thus save the Aral Sea was never realised. It became clear that the sea was doomed, as even if no water was to be taken from the Amudarya and Syrdarya, the sea depression would be completely refilled only in 200 years. In 2003 Kazakhstan made an attempt to save some part of the reservoir. A dam was built in 2005 to separate the northern part of the Aral Sea from its southern section. According to experts, the larger southern portion of the lake will disappear by 2020.

The shrinkage of the sea has had an environmental impact, too, making the climate of the region more continental: summers have become drier and hotter and winters cooler and longer. Large amounts of dust from the former sea bottom containing salt, pesticides and other harmful chemicals are carried by wind to the surrounding areas.

Notwithstanding, tours to the Aral Sea are highly popular today. Tourists are attracted by the beauty of its precipitous shore, the incredible sunsets and the possibility to swim in the disappearing sea and to see the cemetery of ships in the former port of Muynak. The difficult road to the Aral Sea (it takes a whole day to cover the 550 km from Nukus to Cape Aktumsyk) is also very interesting. On the way tourists can stop at beautiful Sudochye lake to take some pictures of the littoral landscapes and the huge amounts of birds gathering there, and at ancient Sak burial grounds near the village of Urta. Tourists can also travel across the wild Ustyurt plateau and enjoy a unique nature of the region.

In the morning meet your guide and driver and depart Nukus towards Muynak. The first stop of the Aral Sea tour will be in Muynak town, where you will see “Cemetery of ships”, the former port with abandoned ships in the sand, and visit Muynak Regional Studies Museum (might be closed without prior notice). Lunch at the guesthouse. Continue driving on the boundless Ustyurt Plateau. You will reach the Aral Sea in the late afternoon. Stop to take pictures of beautiful canyons and the collapsed land. Arrive in a yurt Camp. Camp-style dinner. Overnight in the yurt.
Meals: Lunch, Dinner 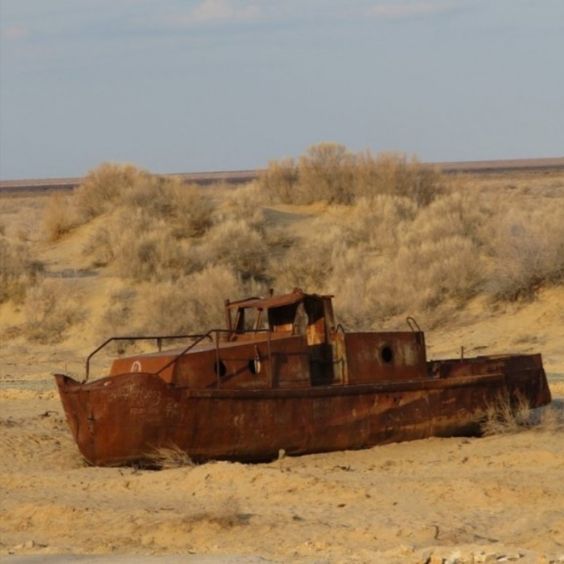 Early wake up to take pictures of sun rise. After breakfast visit the settlement Kurgancha Kala dating back to the 13th century. Pass via Kungrad district, which used to be one of the trading centers on the Silk Road. On the way, see remains of a lighthouse; pass by the ruins of abandoned settlement Urga. Photo stop at Lake Sudochie. Have a picnic lunch on the way. After lunch head back to Nukus. On the way to Nukus, stop at Mizdakhan memorial complex and Gyaur-Kala Fortress. Arrive in Nukus. Transfer to the local airport. End of the tour.
Meals: Breakfast, Lunch 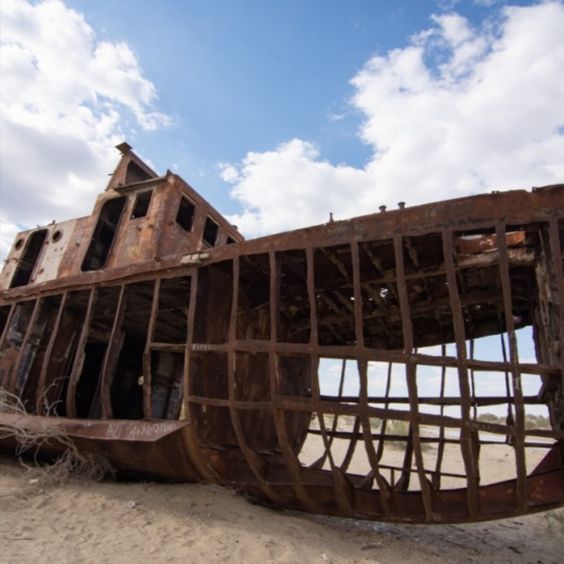