Discover delicious Uzbekistan with an unforgettable gourmet tour that will delight your taste buds and significantly expand the horizons of your knowledge and palate. The Uzbekistan Food Tour will reveal the secrets of local cuisine, and you’ll learn how to cook some Uzbek dishes for yourself: filling patir non (traditional bread), rich pilaf, hearty shurpa, and more. Visit bazaars to see how food has been sold for centuries, and dine on the best Uzbek foods in restaurants in Samarkand, Bukhara and Khiva. You’ll have plenty of time to explore the sights of these famous cities in between dishes of shashlyk (kebabs roasted over coals), lagman (thick homemade noodles served with lamb and vegetable stew), samosa (puff pastry stuffed with meat), and hanum (dough rolled around shredded potatoes and ground meat). The Uzbekistan Food Tour is a tour that you (and your stomach) won’t be soon to forget.

Must try with Uzbekistan food tour

Plov (sometimes also called “osh”) is widely considered to be the national dish of Uzbekistan. It’s a hearty rice pilaf and you’ll probably notice that the word “plov” and “pilaf” are essentially the same. You can expect a heaping portion of rice that has been cooked together with lamb or beef, onions. garlic, raisins, carrots, and apricots. Plov is not only the most famous dish in Uzbekistan, it is also one of the most delicious.

Shashlik is simply skewered meat cooked on the grill. The word “shashlik”, in fact, is just the Russian word for “shish kabob”, and this style of cooking became widespread in Central Asia during the time of the far-reaching Russian empire.

Lagman (sometimes also spelled “lahg’mon”) is another extremely popular food in Uzbekistan. The most common way that lagman is served is as a hearty noodle stew that includes lamb, onions, carrots, bell peppers, tomatoes, potatoes, and garlic. The rich broth is also seasoned with cumin seed, parsley, and basil.

Another wonderful way to enjoy those delicious hand-pulled lagman noodles is stir-fried. The noodles are pan-fried with peppers, onions, tomatoes paste, and whatever other vegetables the kitchen has on hand. It basically tastes like stir-fried spaghetti. And, if you’re lucky, you might find it topped with a fried egg!

Shurpa is an Uzbek lamb soup that you’ll find in almost every eatery in the country. In addition to chunks of lamb, you can expect thick slices of vegetables such as carrots, potatoes, and onions. Spices such as fresh dill and parsley are also used to add flavor to the soup.

Dimlama is a robust one-pot stew typically associated with harvest time in Uzbekistan. It’s full of meat (lamb or beef), potatoes, onions, carrots, cabbage, peppers, and garlic. To prepare dimlama, all of the ingredients are layered in a deep pan, covered, and simmered for several hours.

Another extremely popular food in Uzbekistan, manti (or “mantu”), are large steamed dumplings filled with ground lamb or beef. Extra fat is often added to the dumplings to enhance the flavor.

Arrive in Tashkent. You will be met by SamarkandTours driver and transferred to the hotel. Check in to the hotel at 14:00. Your guide will meet at the hotel lobby to start sightseeing in the capital of Uzbekistan, the biggest city in Central Asia. You will visit Old City part of Tashkent. There you will explore Khast-Imam Complex where the world famous Quran of Caliph Uthman (Ottoman) has been preserved. After looking into all parts of Khast-Imam - Madrasah of Barak-Khan, Tillya-Sheykh Mosque, Mausoleum of the Saint Kaffal Shashi and the Islamic Institute of Imam al-Bukhari, you will take a ride on Tashkent Metro to the city center to walk though Amir Timur Square, Independence Square and explore Applied Arts Museum. Overnight at the hotel.
Duration of sightseeing tour: 4-5 hours 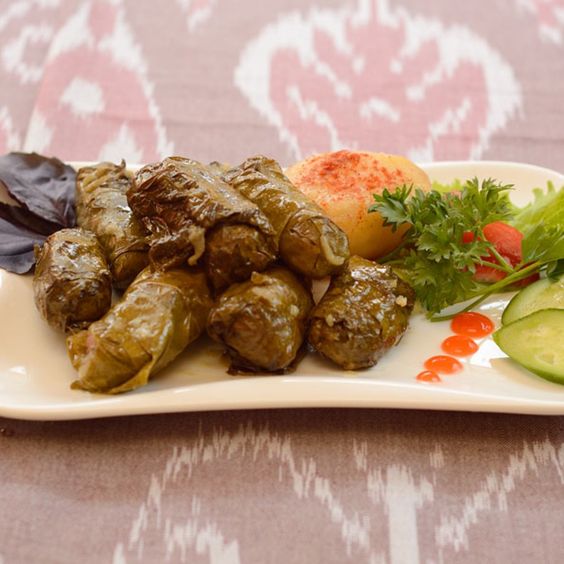 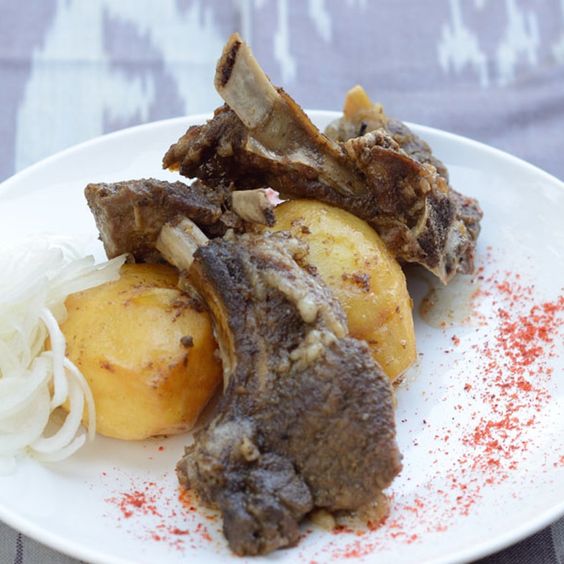 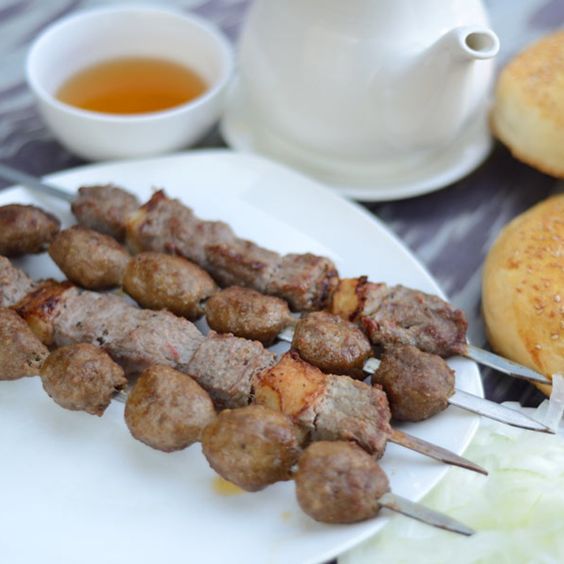 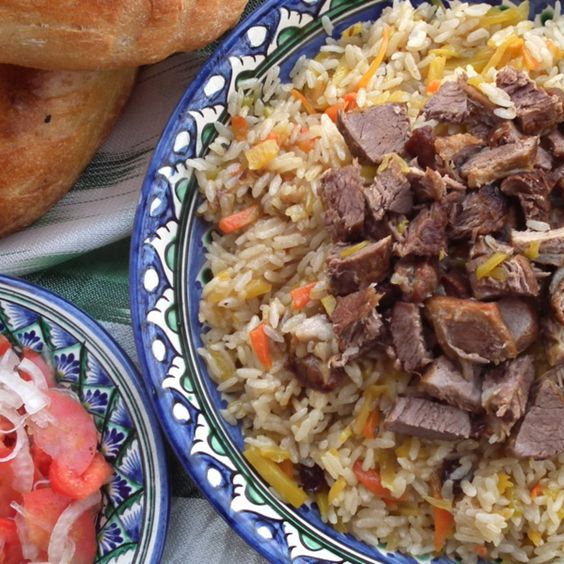 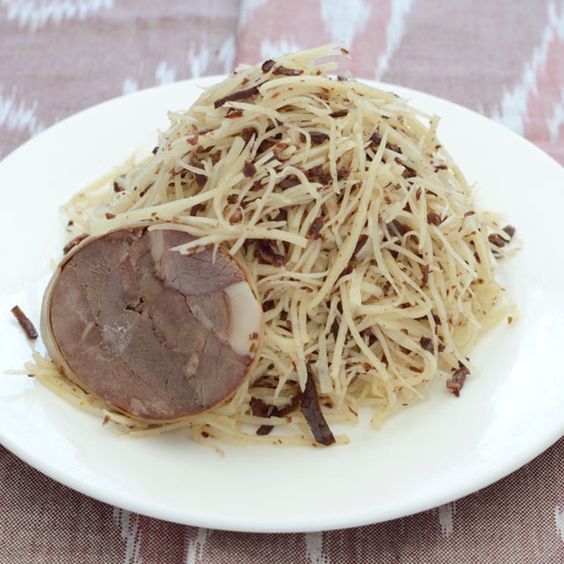 At 07:00 transfer from your hotel to railway station. The high-speed train Afrosiyob departs Tashkent at 08:00 and arrives in Samarkand at 10:10 (300 km). Your guide and driver will meet you at the train station. You will start Samarkand city tour with visit to spectacular Registan Square, remains of Bibi-Khanum Mosque.
Next, the driver will take you to Siyob bazaar, eastern market, where you will meet the chef, who will lead master class in cooking Samarkand pilaf. Siab bazaar is the largest and the oldest marketplace in Samarkand. Its stalls offer to try and haggle for vegetables, fruits, nuts, oriental sweets, spices, cereals. The market houses rows of street food cafes that offer national dishes, most of them cooked on firewood. You will find there shashlyk (barbeque, usually from minced and diced beef), pilaf (Uzbek signature dish similar to Indian briani), lagman (hot noodle soup with beef and vegetables topping), shurpa (soup with rather big pieces of red meat and vegetables), samsa (stuffed puff pastry), khanum (steamed rolled dough with some shredded potato). After dinner you will do shopping together with the chef, he will tell how to choose and differentiate “right” ingredients for Samarkandi pilaf. Then the driver will take you to national house where master class will be conducted. Overnight at the hotel.
Duration of sightseeing tour: 3-4 hours 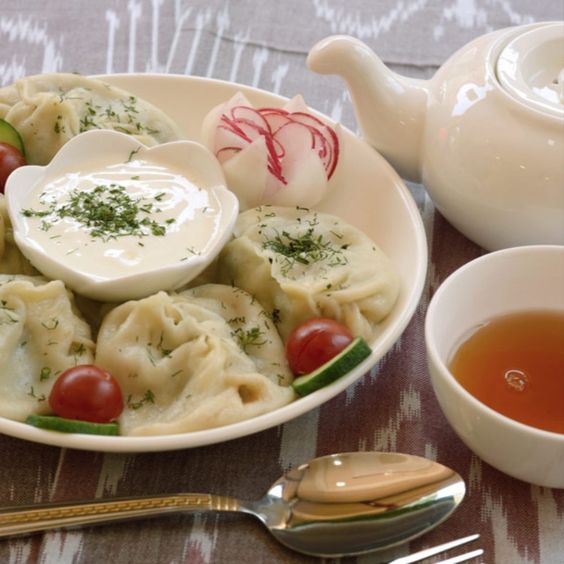 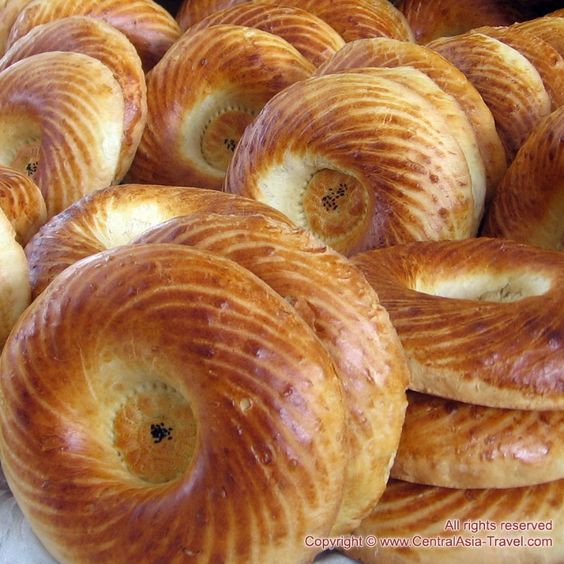 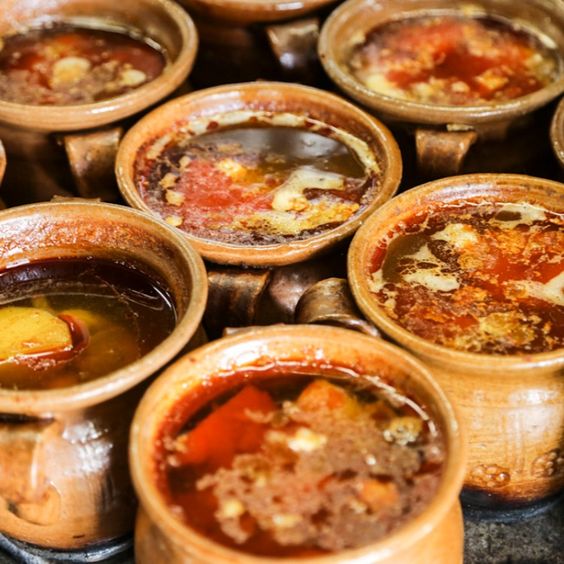 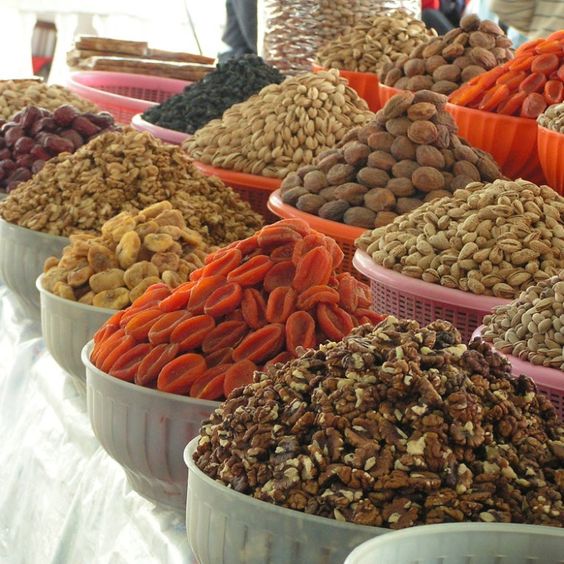 Continue sightseeing: visit Afrasiab Museum and the Tomb of Saint Daniel. Visit Shakhi-Zinda Necropolis and Gur-Emir Mausoleum – authentic shrine of Tamerlane. Then drive to Konigil village to explore traditional way of making Samarkand paper from mulberry. After the sightseeing drive to the wine factory named after Khovrenko for wine degustation. Free time. Overnight at the hotel.
Duration of sightseeing tour: 3-4 hours

In the morning depart Samarkand and drive to Bukhara (280 km, 4 h.*). Stop on the way at Rabat-i-Malik Caravanserai. Continue driving to Bukhara. Arrive in Bukhara, check in to the hotel. Spend your afternoon in fascinating Old Bukhara that has been listed as the World Heritage Site by UNESCO. Explore Kalyan Minaret, Kalyan Mosque and Miri-Arab Madrasah, Magoki-Attori Mosque, Madrasahs of Ulugbek and Abdulazizkhan, trade domes, Lyabi-Khauz Ensemble, Chor-Minor Madrasah. In the evening the National Show at Nadir Divan-begi Madrasah. Overnight at the hotel.
Duration of sightseeing tour: 3-4 hours
*The drive on vans and buses is on average an hour longer.

Start your second day in Bukhara discovering Ark Fortress, Bolo-Khauz Mosque, Samani dynasty and Chashma-Ayub mausoleums. Then visit Sitorai Mokhi-Khosa – the summer residence of Bukhara’s last emir, unique site that combines Oriental and Russian architecture. Continue to the Mausoleum of Bakhouddin Naqshbandi. You will have master class on cooking shurpa (soup with rather big pieces of red meat and vegetables) or mampar (soup with diced red meat, vegetables and plain dough) after the sightseeing tour. Enjoy free time in the afternoon. Overnight at the hotel.
Duration of sightseeing tour: 5-6 hours

In the morning depart Bukhara and drive to Khiva (480 km, 7-8 h.*). The Great Silk Road once routed through Bukhara and Khiva ran through the Kyzylkum Desert, as the present road does nowadays**. Stop en-route to enjoy views of the desert and Amu Darya River. Arrive in Khiva late in the afternoon, check in to the hotel. Time for rest. Overnight at the hotel.
*Since there is only one cafe on the way, you might want to consider preparing a packed lunch before this trip.
**Some parts of the road are not in the best condition. 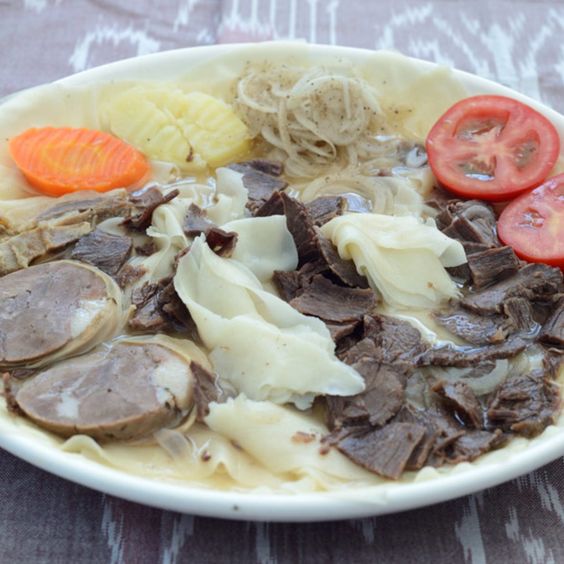 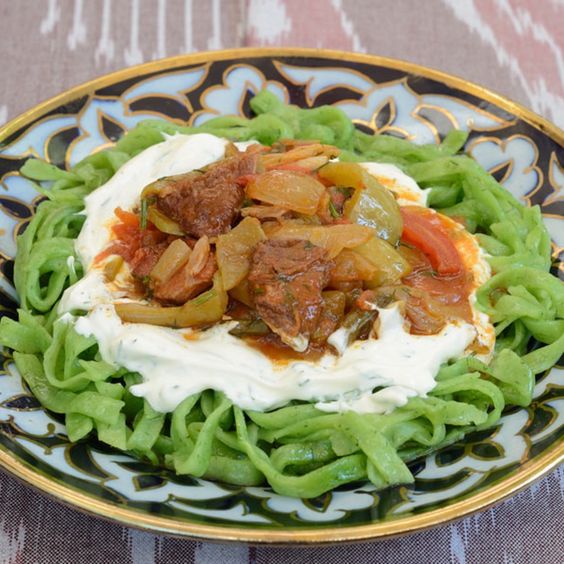 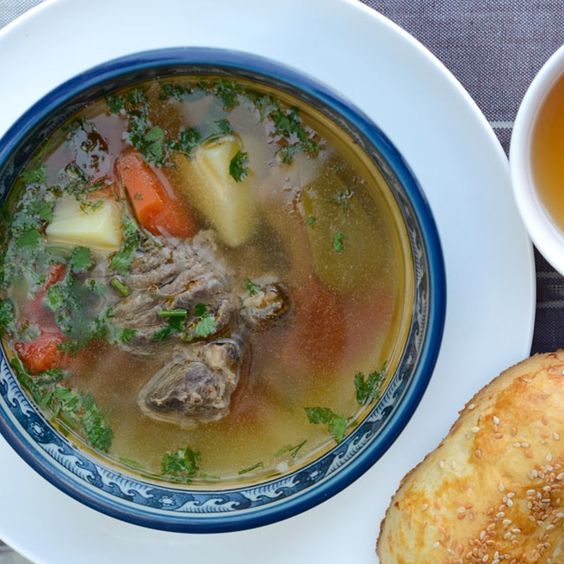 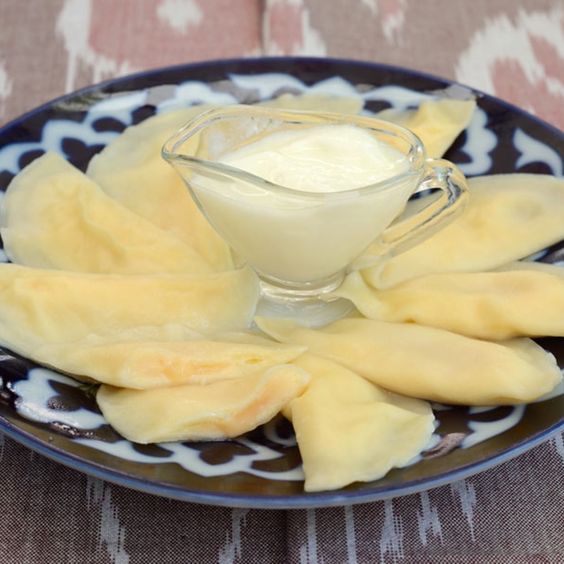 In the morning transfer to Urgench airport (30 km, 35 min.) for flight to Tashkent (1093 km, 1 h. 40 min.). Upon arrival you will be met by the driver, who will take you to Chorsu Bazaar – one of the oldest bazaars in Uzbekistan. On counters of this oriental Bazaar you can find almost everything: fresh fruits, amber-colored dried fruits, Uzbek bread (Non) with delicious smell and many other things. They all are so attractive that one can’t pass by them. Next to bazaar there are choykhonas (tea houses), where you can try amber yellow pilaf, tasty shashlyk (grilled meat), and hot shurpa (soup). Your Uzbekistan food tour will be summed up with a very local lunch here; after, you will be transferred to the international airport in the evening.