Book the Tashkent Layover Tour to make the most of a few hours in the capital of Uzbekistan. This transit tour touches the top tourist sights: Khast-Imam Complex, where one of the oldest Qurans in the world is kept; Chorsu Bazaar, a vital hub and trading post; and the Tashkent Metro, the oldest in Central Asia. Enjoy lunch in a local restaurant, strolls through some of the biggest squares in Tashkent, and finish your tour back at the airport.

Must visit on your Tashkent Layover Tour

Bazaar is the heart of every oriental city, the center of public life, breadwinner of the whole city. Since the dawn of time bazaars appeared on the intersections of trade roads, on big squares of cities. They played role of main places of the city, where merchants, traders and common people gathered to discuss important news, to know prices, to have a rest in cozy choykhana (Uzbek café) eating pilaf and drinking green tea. Also bazaars were the places of main entertaining events of the city – theatrical performances.

Tashkent Bazaar Chorsu, the age of which is more than hundred years, also was always located on the main square of the city Eski-Juva. Old bazaar constructions destroyed and went bad, but the traditional architecture remained unchanged – domed large premises. This was the only way to protect oneself from heat and dust in terms of hot and dry Asian climate.

Hast Imam Square (Hazrati Imam) is a religious center of Tashkent. Hast-Imam is located in the old town, within neighborhoods with the old wattle and daub houses that have experienced earthquake of 1966.

This complex appeared near the tomb of one of the first imam of Tashkent city, the famous scientist, scholar of the Koran and Hadith, poet and craftsman Hazrati Imam (full name – Abu-Bakr Muhammad Kaffal Shashi).

On the territory of the Hast-Imam, there are few arhitectural monuments, including the madrasah of Barak-Khan, Tilla Sheikh Mosque, mausoleum of the Saint Abu Bakr Kaffal Shashi and the Islamic Institute of Imam al-Bukhari, where future preachers are taught. The Spiritual Administration of the Muslims of Central Asia, led by the Mufti, is also placed there.

Independence Square is located in the center of Tashkent city. It is a favorite resting place for the Tashkent residents. The fact that the most beautiful fountains of the city are located in the square contributed considerably to it.

Independence Square as many other places in Tashkent has its own history. Before 1865, not far from this place there was a palace of Kokand khan. In 1865 the Kokand khanate was liquidated and by order of the Russian administration and the construction of a residence for a Turkestan Governor-General began next to it. Later, this residence with a vast garden was named the White House. In the colonial period a wappenshaw was held on its ground before the General-Governor’s residence.

In the Soviet time the square was re-named for Lenin Square. A monument to Lenin was erected in the center of it. And construction of fountains and development of the square itself began at this period.

Upon declaration of independence in 1991 Lenin Square was re-named to Independence Square (Mustakillik Maydoni) (1992). The monument to Lenin was dismantled and an Independence Monument in a form of a globe with Uzbekistan’s borders outlined on it was installed instead.

After overall reconstruction carried out in the square, many buildings were renovated and they acquired a modern look. The central figure of the square is sixteen marble columns joined by a bridge, supporting the sculptures of storks who symbolize peace and quietness from the earliest times. The alleys with green zones and beautiful fountains from their both sides are stretching from the colonnade to the Independence Monument. Under the monument there is a figure of a woman holding a baby in her arms – a symbol of Mother-Motherland.

The guide and the driver will meet you at Tashkent International airport. Tashkent layover tour starts with a visit to Old City part of Tashkent where you will explore Khast-Imam Complex and Chorsu Bazaar. Then you will take a metro ride to the city center to walk through Amir Timur Square and Independence Square. Drive around the city. Minor Mosque, State Opera and Ballet Theatre are optional sights, if your layover allows. During the tour you will have lunch in a local restaurant. The driver and guide will round up the tour bringing you back to the airport.

The program usually takes 4-5 hours, but easily customised upon your request. 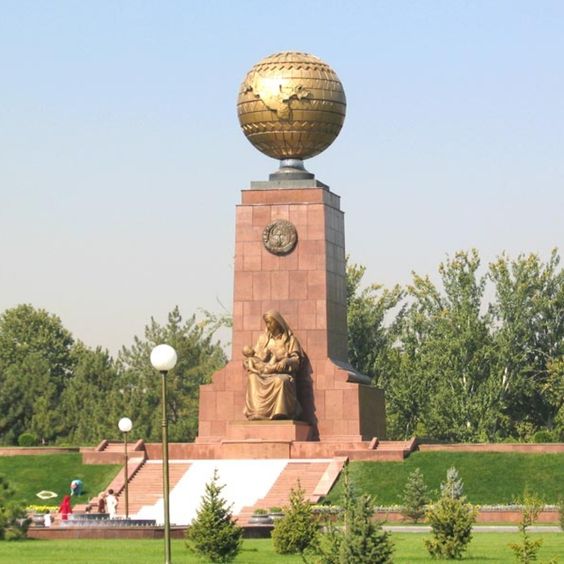