Explore the cultural and literary history of Uzbekistan with the Tashkent House Museum Tour. This tour will take you to the houses of prominent writers, painters, dancers, composers and musicians of the past century, and will let their houses tell you far more than books and images can communicate. This tour can be customized to your interests from the list of house museums below.

Must visit on your Tashkent museums tour

Hidden in the center of Tashkent, not far from a vibrant road behind residential houses and business centers, there is a museum, dedicated to one of the outstanding women of Uzbekistan – Tamara Khanum. The house museum, found in the street named after this great singer and dancer, is the place, where she spent the last years of her life.

Tamara Khanum was born in 1906 in Fergana Valley. Her real family name is Petrosyan, she is an Armenian by origin. All her biography is steeped in love of stage, where she first appeared at the age of 13. She graduated from Moscow theater school in 1925, and around at the same time, she began her active concert activity: she appeared in Paris and other European cities, and contributed much to opening of musical-drama theaters in different Uzbek cities, kept correspondence with world’s art workers.

At the age of 30, Tamara Khanum became a soloist of the Uzbek Philharmonic and was actively engaged in the reform of Uzbek national dance. However, the world-wide fame came to her due to her collecting of dance and song folklore of different nations. She could learn a folk song and dance from any country for a few days, and then perform them as though she came from there. Thanks to her concerts in different countries she had her own collection of national dresses, included today into the Tamara Khanum museum exposition. There you can see Slavonic dresses, Chinese and other Asian costumes and even an Egyptian dress.

In one of the residential areas of Tashkent, among apartment buildings, there stands a small house with the gates adorned with a memorial plaque stating that there lived and worked an outstanding artist of Uzbekistan – Ural Tansykbaev. This house museum was opened in 1981, seven years after the master’s death; its founder and first director was Tansykbaev’s wife – Elizaveta Yakovlevna.

Ural Tansykbaev was one of the most famous artists of the USSR, who depicted the life of Uzbekistan in the mid-XX century. When he was a common worker in his youth, he was absorbing all the images associated with the homeland to transform them later into hundreds of paintings, which depicted the life of the Uzbek people and beautiful nature of his native land. To date, his paintings are displayed at the State Tretyakov Gallery, the Moscow State Museum of East, and the museums of Uzbekistan as well.

The centerpiece of Ural Tansykbaev House Museum is his studio, where everything has remained in the same state as it used to be in 1974, and even the easel still keeps his unfinished painting “Charvak in 1973”. In addition to the studio, the house includes a living room, where the artist received visitors, a bedroom, and also a private office. Everything in this house is left on its place as it was during the artist’s life. Also, in 1994, timed to the Tansykbaev’s 90-th anniversary, a two-storey exhibition hall adjacent to the house museum was built on to demonstrate large canvases and the paintings that were not displayed in his house.

A guide and driver will meet you at your hotel in Tashkent, to start house-museums tour. The suggested program includes visits to the house museums of:
Tamara Khanum - the first Uzbek dancer who performed without a veil;
Ural Tansykbaev - peoples artist of the Uzbek SSR whose paintings are included into the gold reserves of Tretyakov Gallery in Russia and others;
Sergey Borodin - a famous Russian writer of the 20th century, an author of essential historical books.
Sergey Yesenin – the house museum is dedicated to his one month stay in Tashkent, where over 3000 exhibits donated by Yesenin's children and relatives are displayed.
After lunch break continue with a visit to Yunus Rajabiy house-museum. He is famous for preserving shashmakom, national musical legacy named by UNESCO a Masterpiece of the Oral and Intangible Heritage of Humanity in 2003.
Abdulla Qahhar – a famous writer of the 20th century, a National writer of Uzbek SSR who was posthumously awarded the National Order of Merit.
The day tour will be finalized with a drive back to your hotel.
Duration of sightseeing tour: 5-6 hours 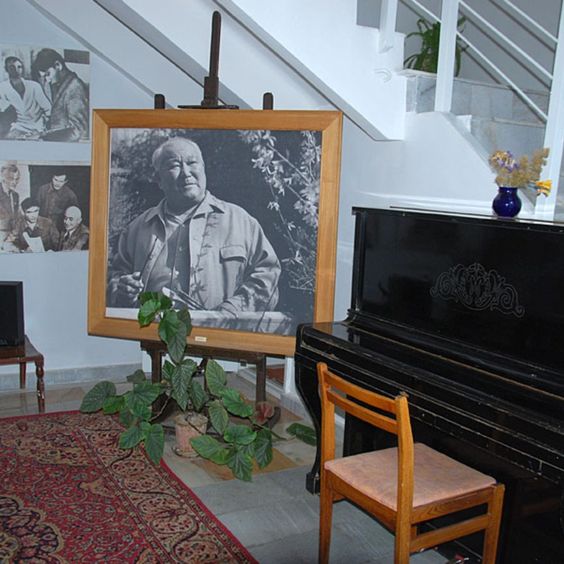