Uzbekistan’s long history is well represented in its many historical monuments and archaeological sites. From the ancient sites in Tashkent to the untouched rural traditions of the Nurata Mountains, this tour criss-crosses not only the territory of Uzbekistan itself, but also time periods and fields of study. Walk among the remains of Buddhist temples in Fergana and Termez, climb Zoroastrian fortresses near Khiva, and see the main archaeological sites of Uzbekistan’s biggest cities. The Uzbekistan Archaeological Tour is the best tour for getting to know this country, past and present.

Must visit on your Uzbekistan Archaeological Tour

The great age of the city is designated by artifacts found on the sites of excavations. Traces of ancient settlements can border with urban new buildings and be just a clay pile for uninitiated. But it takes only to dig deeply (literally) and you may “hear voices” of millennium-old history. Tashkent has preserved some sites of ancient settlements: Aktepa, Ming Urik and Shashtepa.

Until recent time, there were Ming Urik hills on one of the parts of Movarounnakhr street connecting the Amir Temur Square. Hills got its name from the large apricot garden, which was laid out there.

The Said Akhmad-Khoja Madrasah was built at the end of the XIX century. This is one of the “youngest” Margilan monuments, aged a little more than 200 years. The madrasah boasts harmony of the composition, proportionality of the elements and rational design of the building. The basis of the complex is the madrasah itself and a mosque, consisting of a hall and ayvan with painted ceilings.

Silk comes to Central Asia in the middle of the II millennium with the beginning of the Great Silk Road development. A legend has it that a Fergana’s ruler ordered his servants to learn secretly the silk weaving know-how from Chinese masters, and this caused a war to release between the two countries.

Unique in its original fluted form was the Jarkurgan in the medieval village of Charmangan, erected in 1109 by the architect Ali ibn Muhammad Serakhsi. From the former two-tier minaret only the lower tier has been preserved.

Zurmala is a 12-m high Buddhist stupa, found in the north-east of the ruins of Ancient Termez. It was built in the Kushan era, about I-II centuries BC, when Buddhism was ruling religion in the Central Asian region.

This almost a modern complex dates back to the beginning of the XX century. It includes a minaret and a mosque. The complex is called in honour of Islam Khoja, Prime Minister of Isfandiar Khan. Islam Khoja minaret called the symbol of Khiva.

It is narrowed upwards, which dates back to the earliest examples of the architecture of the XIV century. The brickwork alternates with bands of glazed patterns on the minaret. The height of the minaret 56.6 meters, diameter of the fundament is 9.5 at the base.

Arrival in Tashkent. You will be met by Advantour driver and transferred to the hotel. Check in at the hotel at 12:00 (noon). Start the guided sightseeing city tour. Visit the archaeological excavations at Aktepa, Yunus Abad district. The hill of Aktepa, you will have magnificent panoramic view of Tashkent. The few know that the hill is the remains of the fortress, built in the 5th century. The fortress had protected Tashkent from invasions on the north up to the 7th century. The next discovery will be Ming Urik, the ancient settlement, located almost in the heart of Tashkent. Archeologists discovered the Temple of Fire there. Continue to Kanka, the ancient settlement, located in Akhangaran Valley, 70 km away from Tashkent. Archaeological excavations are still being conducted. The Kanka settlement was the oldest and largest oasis in Tashkent. It existed from the 3rd century BC till 12th century AD. Return to Tashkent. Take a ride on Tashkent Metro to the city center to walk through Independence Square. Return to the hotel. Overnight at the hotel.

Drive to Fergana Valley (320 km till Fergana city). The mountain serpentine that connects Fergana Valley with the rest of Uzbekistan runs via the picturesque mountain pass Kamchik (2267 m. above the sea level). Arrival in Kuva, a small town located in 20 km to the north-east of Fergana region. During the excavations in this little settlement, archeologists found out the whole residential quarter. The main discovery at Kuva was Buddhist temple. Transfer back to Fergana. Overnight at the hotel.

In the morning, drive from Fergana to Margilan and visit Said Akhmad-Khoja Madrasah. Today, madrasah is home to a number of craftsmen who produce handmade carpets and silk. Explore traditional eastern market and continue to Yodgorlik Silk factory to see how silk with traditional Ikat patterns produced. If it is Thursday or Sunday, visit Kumtepa Bazaar, the largest market in Fergana Valley. Drive to Rishtan to the house of a well-known ceramic master Rustam Usmanov whose works are exhibited worldwide. Enjoy pottery workshop and have a look at ceramic collection in a small museum. Continue to the house of craftsman Bakhrom-aka to visit a traditional Kyrgyz family who manufacture wool carpets. After Ok Yer village return to Tashkent. Transfer to the hotel. Overnight at the hotel.

Transfer to local airport for morning flight to Termez (661 km, 2 h.). Upon arrival you will be met by your driver and guide. Drive to Kampyrtepa, that is famous for the ruins of once majestic and invincible fortresses and castles. They reached us from the end of the 4th century BC. Kampyrtepa is one of the oldest archaeological sites in the territory of Uzbekistan. Pass Jarkurgan minaret, Alexander the Great Bridge and arrive to the archaeological site of Dalverzintepa. Excavations in Dalverzintepa demonstrate the development of sculpture in Northern Bactria as well as reflect the Buddhist themes of the Kushan epoch. Continue to explore the ruins of Khalchayan city. During the excavations of Khalchayan a significant amount of unique archaeological findings like terracotta sculptures, ceramic dishes, coins, household items were discovered. Return to Termez. Overnight at the hotel.

After breakfast start guided Termez sightseeing, which is considered to be an ancient Buddhist center and one of the oldest cities in Central Asia. Visit Kokildor-Ota Khanaka, Fortress Kirk Kiz – a summer residence of Samani rulers, Sultan Saodat Ensemble, and Zurmal Tower – Buddha's stupa. Continue to Buddhist archaeological sites of Karatepa and Fayaztepa, Mausoleum of Al-Hakim at-Termezi and the Archaeological Museum. Free time in the evening. Overnight at the hotel.

In the morning depart Termez and drive to Samarkand (380 km, 6-7 hrs.). Arrive in Samarkand. Check in at the hotel. Free time. Overnight at the hotel.

Meet your guide and driver at hotel lobby to start city tour. Visit spectacular Registan Square, Ulugbek Observatory. Continue to the ancient settlement of Afrasiab (VII-II centuries BC) and Museum of Afrasiab , located at the same site and displays the collectin of archaeological findings, carried out on the site of this ancient city. In the afternoon, transfer to the village located in Nurata Mountains (330 km, 5-6 h.*). Arrive in Ashraf, Sentyab or Yangi Hayot village, accommodation in the guesthouse. Both villages are located far away from roads and cities in a picturesque mountain area with fresh air, green orchards, singing birds, sky full of stars, and friendly people. Have a tour around the village and explore life of locals. Overnight in the guesthouse.

People have been living in Nurata Mountains since the times of Alexander the Great. Villagers keep house and farm as it was done centuries ago. Women cook on the open fire, weave, spin yarn, bake their own bread, milk the cows. Men farm, shepherd, built houses of stone, rocks and clay. Stay in a village, watching birds, hiking, riding donkey, and participating in cooking traditional food gives an excellent opportunity to witness life of local peasants.

Lunch with the local family. In the second part of the day drive to Bukhara. Arrival at Bukhara. Check in and overnight at the hotel. 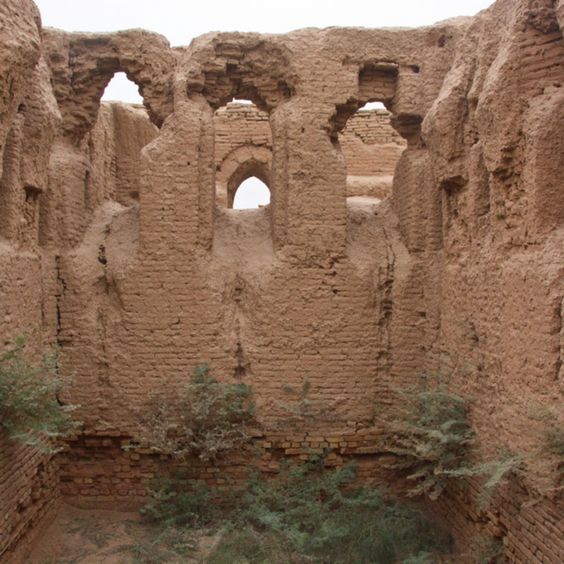 In the morning trip to the ancient town Paykent, so called Asian Pompeii. There you will visit the museum of "The History of Paykent settlement" near the ruins of the fortresses that was opened in 2003. The exposition of the museum presents archaeological findings (household utensils, jewelry, pottery, Chinese and Japanese porcelain, coins and many other items. Thanks to findings one can learn 15 centuries long history of the settlement.
Return to Bukhara. Enjoy a walking tour with a guide in Old City in the second half of the day. Visit Lyabi Hauz Ensemble, Magoki-Attori Mosque, Chor-Minor Madrasah, trade domes, Kalyan Minaret, Kalyan Mosque and Miri-Arab Madrasah, Ulugbek and Abdulazizkhan madrasahs, Ark Fortress, Bolo-Khauz Mosque, Ismail Samani and Chashma-Ayub mausoleums. Overnight at the hotel.

In the morning depart from Bukhara and drive to Ayaz Kala Yurt Camp (480 km, 7-8 h.*). The contemporary highway goes through the Kyzylkum Desert duplicating the historical Great Silk Road **. On the way, you will stop to enjoy views of the desert and Amudarya River. Arrival and accommodation in a yurt. After, dinner and rest time. Overnight in the yurt.
*It is advised to take lunch-boxes for this trip.
**some parts of the road are presently being renovated.

You will start with Ayaz-Kala, one of the largest fortresses of Ancient Khorezm that reached us from the 2nd century AD when Kushan Empire prospered. Ayaz-Kala was neither a city nor a settlement; it was a fortress complex where nearly 19 centuries ago border protecting groups of Kushan dynasty settled down. After you will be transferred to the Kyzylkum Desert (150 km 1,5-2 hours) to continue visiting the archaeological monuments of Ancient Khorezm: you will visit Kyzyl-Kala - a unique monument of Ancient Khorezm architecture relevant to Kushan-Afrigid period of antique history, Toprak-Kala - ancient settlement which was the capital of Khorezm in the 3rd century AD. Toprak-Kala is called "the museum of fine arts of Ancient Khorezm". It is the only completely dug out monument of architecture of Khorezm. Its sizes and genius architectural design wonder not only tourists, but archeologists also. There is a legend that there was a tunnel connecting Toprak-Kala and Kyzyl-Kala. Kyzyl-Kala was a means of protection. After, transfer to Khiva (150 km, 1,5-2 h). Check in to the hotel. Free time. Overnight at the hotel.

Check-out from hotel till noon. Today you will visit Ichan-Kala Fortress, a UNESCO World Heritage site. The tour features visits to Mukhammad Amin Khan Madrasah, Mukhammad Rahimkhan Madrasah, Kalta Minor, Juma Mosque, Toshkhovli Palace, Pakhlavan Makhmud Mausoleum. Try yourself at climbing Islom Khodja Minaret, the highest minaret in Uzbekistan. Enjoy breathtaking panoramic views of Old Khiva in Kunya-Ark.
Free time in the afternoon. In the evening you will be transferred to Urgench airport (30 km, 35 min.) for flight to Tashkent (1093 km, 1 h. 40 min.). Upon arrival transfer to the hotel. Overnight at the hotel.

Check out from the hotel till noon. Visit the History Museum of Uzbekistan. Transfer to Tashkent International Airport. Departure. End of the tour.