horseback. In Turkic “kup” means “many” and in Persian “kari” means “work, case”, hence “kupkari” is “the case of many people”.

In Uzbekistan the kupkari competition is also called an ulak. In this game skilled equestrians compete to carry a goat or sheep carcass into a goal. 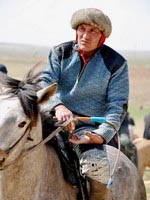 Equestrians prepare for the kupkari competition in advance and carefully. They choose a strong, short horse of great endurance. The horse should be shortll to make it easier to pick up the carcass of an animal from the ground, because in the heat of battle, it often falls to the ground. For the Kupkari game, riders usually wear head protection, quilted cotton robes and pants to protect themselves against other players’ whips. Because getting excited, horsemen can whip each other; it is not prohibited by the rules of the game.

Kupkari competitors line up and wait until a village elder or other respected person leaves the animal carcass in the center of the circle and signals the start of the competition.

Then the horsemen try to grab the lamb or goat from the ground and reach the finish line without losing their trophy, while fighting off rivals who are trying to take away the animal carcass. According to the Kupkari rules it is prohibited to attack a rival from behind or knock the rider off the horse.

The riders keep away from the audience not to strike someone accidentally. The audience is prohibited to help riders, giving them the carcass from the ground. The winner, who carries the trophy into a finish line first, gets a prize. In the old days it was a colorful rug, bulls, sheep and goats, expensive fabrics. Nowadyas, the prize for the Kupkari winner may be, for example, expensive appliances or a car.